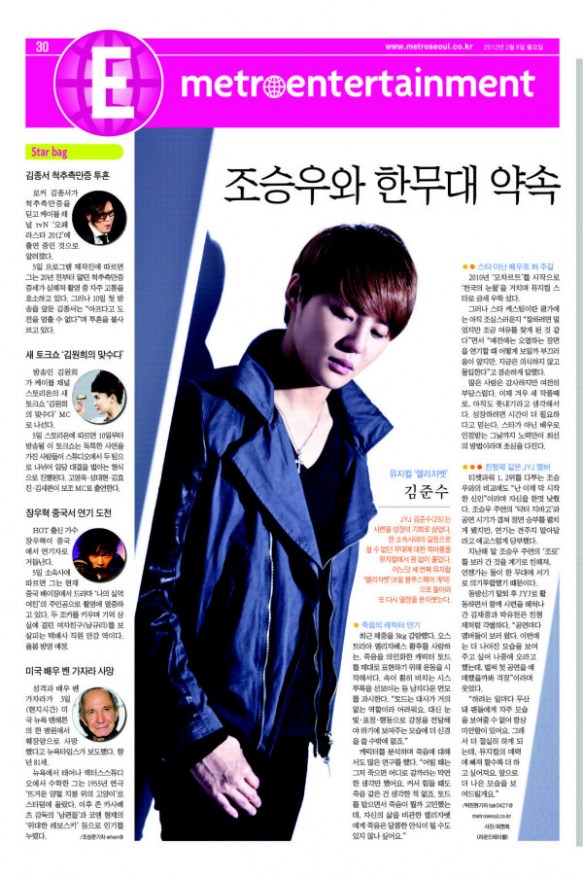 JYJ Kim Junsu (25) has turned hardship into an opportunity to grow.

Because of the conflict with former agency, he couldn’t stand on stage but musical solved his thirst [of activities].

The time has slipped by, he will returned with his 3rd musical ‘Elisabeth’, letting his passion pour out once again.

He has lost 3kg recently. It’s because he want to properly represent the character Tod, a personification of Death and who loves Elisabeth, the Empress of Austria. “The difficulty is that Tod has a very few lines. Instead, I must concentrate on conveying emotions by eyes, facial expressions and actions.”

While analysing the character, he also did a lot of reseach about the death. “When I was a kid, I only had some vague thoughts about where a person go to if he/she dies. When I have grown up, I have never thought about such thing as death even in hard times. Taking this role, I was concerned  about what the death is. I don’t want the death to be a sweet rest to Elisabeth who feels pessimistic about her own life.”

– Not a star but an actor

Starting with ‘Mozart’ in 2010 then ‘Tears of Heaven’ last year, he stands tall as a musical star.

But he seems still careful about the praise of casting star. He humbly replied,  “It’s still a long way off to me to do better but I think that I have found a little composure. Before, when I was performing  a crying scene, shyness came first and I wondered how I would look [while acting]. But now I can be immersed without even know about it.”

“I’m thankful for that much love but I also feel burdened. Now that I started my 3rd musical, I still think that I’m a rookie. I believe that I need more time to grow up. Until the day that I’m recognized as an actor, not a star, the best way is to make more efforts.”

Being compared with Jo Seungwoo in the competition of #1, #2 Ticket Power, he lowered himself, “I’m still a rookie who just took the first steps.” ‘Elisabeth’’s performing times are overlapped with ‘Doctor Zhivago’ of Jo Seungwoo but Kim Junsu cutely asked us to do not compare their actings. Because in the end of last year, he went watch musical ‘Zorro’ of Jo Seungwoo and that was their opportunity to get to know each other. They shared the same desire to stand together on one stage someday.

After withdrawing from DBSK, he has been working as member of JYJ. Kim Jaejoong and Park Yoochun with whom he has overcome hardship are special like real brothers to him. He said with smile, “The members came to see every of my musical. This time I want to show them a better look of mine and told them to come later but I’m worried that they have already booked tickets for the premiere.”

“I always feel sorry that our fans can’t see us often. Lost in the charm of musical, the more I do it, the more I want to do it. I’ll show you a better me in the future.” 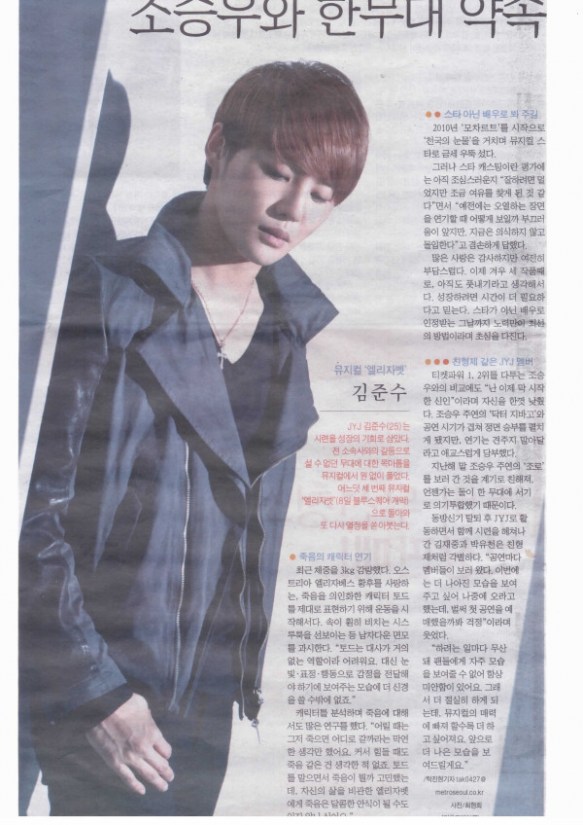 Source: Metro newspaper | Image: @sarakxiah + @nudo_JYJ
Translation by: The Little Pear of JYJ3
Shared by: JYJ3
Please do not add to, alter, or remove the credits.