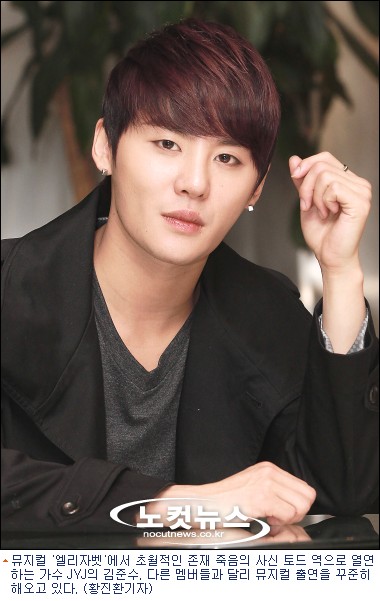 JYJ member Kim Junsu who has built a strong fan base in Korea as well as overseas is now being featured in his third musical.

He took a different route from his fellow member Park Yoochun and Kim Jaejoong who opted to star in drama series. He explained his choice for going into musicals instead by saying, “There’s a unique charm to musicals that’s different from concerts.” Also, he liked the challenge of expressing the art of acting through music.

It is also a genre that he came to know during the most difficult time in his life, after leaving his former group TVXQ.

The singer, whose first musical was ‘Mozart‘ back in 2010 earned has reached higher heights than anyone had anticipated. Tickets for the musicals sold out due to his appearance, and he seemed to channel all of his anxiety and pent up emotions towards his former agency into this musical, and his acting became that much more natural and passionate.

“‘Mozart’ was a project that I took on during the most difficult period in my life, and because of that, it is one that I will never be able to forget as long as I live,” he said.

He didn’t need to think twice about being in his current musical. It was a new project by Sylvester Levay, the composer behind the ingenious music of ‘Mozart’, the musical that Junsu feels so attached to.

This third musical is none other than ‘Elisabeth‘, a musical equally emotional and shocking as ‘Mozart’.

‘Elisabeth’ is a musical about Queen Elisabeth that comes from a royal family in Hasburg, and Kim Junsu plays the role of ‘ambassador of death’, Tod. Once Elisabeth marries Austrian emperor Franz Joseph, she continually experiences discord and tension with her mother in law. Her free will and freedom feels threatened and Tod who sees this tempts her to go to a world where she can experience true and perfect peace along with freedom.

It must have been difficult for Junsu to act in this musical as he does not have a real, concrete character but he remarked that it was easier for him to freely express himself because of that very same reason.

“I didn’t think the character fit well with my past experiences and my personal style,” he said. “It was also a bit intimidating at first because of the fact that I was portraying death itself. But Sylvester Levay told me that because I play a transcendental role in the musical, to just be more like my actual self.”

Although he is starring in the musical alongside big names in the industry such as Song Chang Eui as well as Ryu Jung Han, Junsu will stand out with his youthful energy and use his experience as a dance artist in the musical. The role of ‘death’ in the musical has freedom to taken on different personalities depending on the actor, and Junsu is determined to take full advantage of that. He will dance more than others, and take this as an opportunity to show his fans a new side of himself. 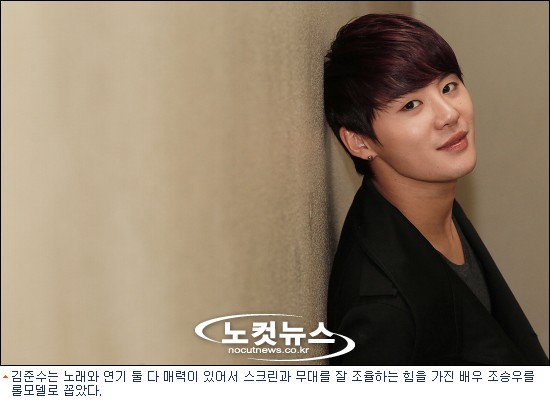 And although this is already his third musical, he still feels a bit of lack in confidence. He is afraid of making mistakes, and afraid that he will inconvenience the other professionals on stage with him.

“I think I’m getting a little closer to becoming a real actor,” he said. “I want to show people that I can do more than just sell tickets. It’s something I need to work on. I want to be both a successful singer and an actor. I guess I want to become like Cho Seung Woo who goes back and forth so naturally from the stage to the small-screen.”

When he builds 40-50 years of experience, the singer would also like to star in major musicals such as ‘Les Miserables‘ as well as ‘Jesus Christ Superstar‘. He also would like to expand, writing and composing songs. Interestingly enough, he also evoked laughs by randomly admitting he would also like to put together an international celebrity soccer team.